Earlier this week, we hosted the UK meeting of CASRAI (Consortia Advancing Standards in Research Administration Information), here at our London headquarters. This was the first meeting of the new UK chapter of CASRAI, bringing together members of the research community from institutions throughout the country.

CASRAI is “an international nonprofit membership initiative led by research institutions and their partners. [Their] mission is to adapt the principles and best practices of open standards and data governance to lead and facilitate key stakeholders in annual deliberations to develop ‘standard information agreements’ that serve as bridges between research information users.”

Valerie McCutcheon, Research Information Manager at the University of Glasgow, chaired the meeting, and began proceedings with an outline of what CASRAI does, including their approach to tackling old problems in new ways. Focussing less on the technical and more on user-to-user activities, covering multiple stakeholders within institutions, we covered the different types of information requests involved in research management processes.

In short, CASRAI helps by:

CASRAI standards are informal. They are constructed voluntarily, with no policing, and ideas are developed collaboratively, by identifying high-priority issues, developing standards for them, then collecting feedback. 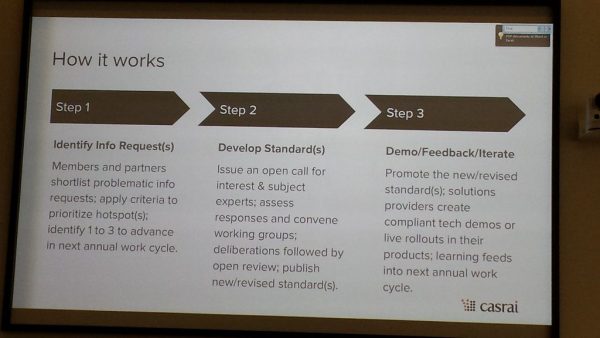 We had a brainstorming session at the event, in which attendees prioritised issues which CASRAI would be well-suited to address. Ideas were sought that:

Some of the topics that came up were open access scholarship, institutional affiliation IDs, reporting on research outputs (de-duplication / interoperability), and more. It was great to see the enthusiasm and abundance of ideas brought forth by attendees. Some of the conversations really highlighted the difficulty of talking about these concerns without lapsing into reliance on systems and technology, rather than terminology.

This was the first UK CASRAI chapter meeting, and we’re interested in seeing what the future holds, as the group grows and its ideas permeate. Thanks to all who attended – if you’d like more information, have a look at the CASRAI website, where you can join and participate in the community’s discussion. Read on for a compilation of all the #CASRAIUK tweets, with some presentation slides included.

The automatic search features are a bonus. I really like the way the new entries arrive automatically, and all I have to do is respond to the prompt to approve them. Navigation in the new release is intuitive and friendly. Linking directly to DOIs and full text is convenient and makes it easy to access and share my own research.

The University measures the individual research activity of academic staff. This Measure of Research Activity (MoRA) requires the collection of publication data from faculty. Symplectic Elements supports this beautifully.

[Elements] will help to bring transparency to the richness of thought showcased within non-traditional publications, providing a more holistic representation of faculties’ scholarly work.

Feedback to date has been extremely positive from all levels across the University, with individual academics and colleagues actively promoting the ease of use of the system.